OCCORD & The People of Anaheim Mobilize to Assure Government Transparency is Uplifted–The Internal Investigation Related to the Angel Stadium Deal Will Be Made Public!

Anaheim,CA–Yesterday, after more than 100 online petitions were signed, dozens of calls, and over 30 public comments from local residents and allies, the city council of Anaheim voted unanimously to approve agenda item #3, making the Angel stadium internal investigation report public once concluded.

Immediately after the FBI filed an affidavit with the courts back in May, former Mayor Harry Sidhu resigned and the city of Anaheim immediately voided the transaction to sell the Angel Stadium and its land to SRB Management, a company headed by Arte Moreno.

The city's internal investigation is being led by the JL Group and retired Judge Clay Smith. Their  report is expected to be completed by early Spring of 2023 and it will be submitted to the city clerk of Anaheim. As a result of mobilizing the community, it will also be made publicly available for residents and anyone to see who is implicated in the corruption connected to the Angel Stadium.

Ely Flores, OCCORD’s Executive Director states the following after the successful vote took place: “The unanimous “yes” vote to release the findings of the internal investigation into the Angel Stadium deal is a victory for the community but, we need more. We need the city council to ensure that the report will be released immediately to the public upon completion. We continue to urge the City of Anaheim to pass Campaign Finance Reform to free our elections from corporate special interest money.”

Valerie Garcia, Ponderosa Neighborhood Union leader and resident affirms, “Making public comments at yesterday's Anaheim City Council meeting opened my eyes about the corruption that exists in the city. Most of the people in the community that spoke also demanded the same thing: transparency about the Angels investigation and rent control. It is unfortunate to know what our representatives do, the government has to be held accountable. Now let's demand rent control, if we can! When we unite as a community we can demand our rights for the benefit of all.”

Jeanine Robbins, member of the Clean Up Anaheim Coalition said, “Yesterday in Anaheim the community turned out to protest the lack of transparency that has been prevalent among our city council. The residents demanded future transparency from the council by insisting that the council vote to release the internal investigation relating to the sale of Angel Stadium. Listening to the resident's demands, the council unanimously voted to release the report once it has been completed. The community has won an important battle.” 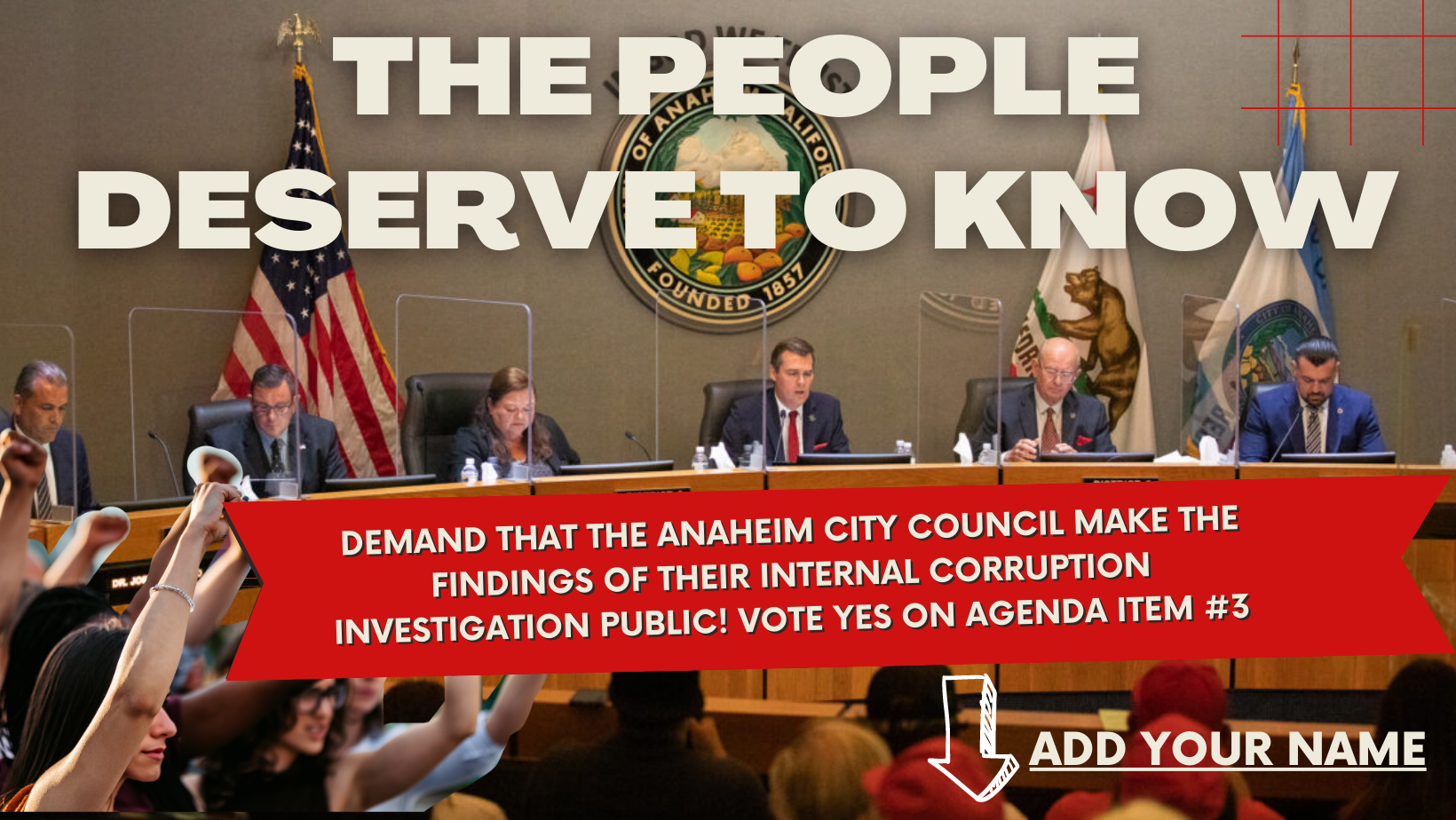 On November 15th, the Anaheim City Council will decide if it wants to make the internal corruption investigation regarding the Angel Stadium public for residents to see and access. Anaheim is currently the epicenter of economic and political corruption. Corporations and business special interests have donated millions of dollars to create a city council that lacks transparency, accountability, and favors corporations over its working class residents and families. Add your name below and demand Anaheim City Council vote YES on agenda item #3 to make the angel stadium investigation report public once it is finished.

The city council unanimously voted to approve Agenda item #3 guaranteeing the public's right to inspect and review the report of the internal investigation regarding the angel stadium deal. This internal investigation is being led by the law firm JL GROUP and retired judge Clay Smith. The findings will be published into a report that will be delivered to Theresa Bass, Anaheim's current city clerk. This report is expected to be completed by Spring of 2023. OCCORD will be keeping a close watch on any updates regarding the investigation, and we encourage everyone to learn more about this and what it means for Anaheim residents. Continue to ADD YOUR NAME BELOW.