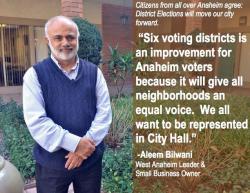 In 2014, 68.3% of Anaheim voters said YES to Measure L, choosing a district-based City Council election system. This victory was the culmination of years of organizing and advocacy by OCCORD and our community partners.

For years, Anaheim's city council was elected at-large, meaning that representatives could live anywhere in the city. Unfortunately, for a city of Anaheim's size and diversity, this system meant that many neighborhoods had no representative and their needs and issues went unheard at City Hall. OCCORD's research demonstrated that neighborhoods with resident council members were receiving disproportionate amounts of city investment in community assets like parks, while neighborhoods without representatives were being neglected. We proposed district elections, in which each district of the city elects its own representative to City Hall, as a solution. After a lawsuit, resident advocacy, and a successful ballot campaign, Anaheim changed its election system to a district-based system with six districts and an at-large Mayor in 2014.

In 2016, OCCORD and our allies participated in the process to draw the map of district boundaries. Despite challenges along the way, we were thrilled to see the City adopt a map that represents all of Anaheim's diverse neighborhoods as best as possible. We were even more excited when 2016's election - the first using districts in Anaheim - saw an increase in voter turnout, particularly in districts that had previously gone unrepresented.

To learn more about implementing district elections in your city or school district, please contact us at [email protected]